BE CAREFUL WHAT YOU WISH FOR

Written by Tom Letizia on August 21, 2017. Posted in Uncategorized 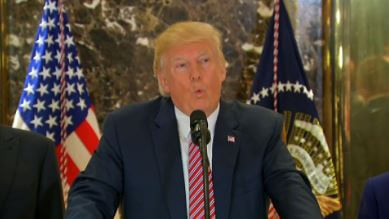 Seems like not a week goes by when I say, “this was a bad week for Donald Trump,” but last week may have topped them all. Politico rated his worst weeks, listing nine very bad weeks since his inauguration, with last week being the #1 worst – Trump started the week condemning the Ku Klux Klan and white supremacists for the fatal violence in Charlottesville, then changed direction and doubled down on his earlier argument that “many sides” were to blame for the weekend’s events.

#2 worst: August 7-13 In the first 24 hours of Charlottesville, Trump gave his first response, blaming “many sides” for the violence.

#3 worst: July 24-30, which some say may have been the worst – The Senate voted to kill the Republican bill to repeal Obamacare. The military was caught unprepared when Trump tweeted his plans to ban transgender troops. The Boy Scouts apologized after Trump gave a political speech at their annual jamboree. Trump publicly humiliated Attorney General Jeff Sessions. White House Communications Director Anthony Scaramucci gave a scathing, expletive-laden interview to the New Yorker. Priebus was fired and John Kelly was named as his replacement. Yes, that all happened in just one week.

Republican office holders and Republican candidates now must decide, if they will risk their political career’s by continuing to follow President Trump. Trump is clearly losing his support. Just look at states he won and the rapid decline in those poll numbers.

The cries for impeachment will now be heard with regularity and the chances of the impeachment process beginning are greater than ever. Remember Trump has publicly lost 3 Senate Republicans (recent healthcare vote). He is being criticized in the press by additional Republicans every day and privately (the silent ones worried about the political fallout) could be far more. He does not have one Senate Democrat he can count on. So, a super majority in the Senate is not out of reach to successfully impeach this President.

Democrats need to be careful what they wish for. A President Pence will bring more conservative legislation, a further right leaning court system and extreme far right social legislation. It could also put Pence in the position of being the favorite and frontrunner in 2020 and allow the Republicans to retain control of the White House.

While things look bad for Republicans today, a word to the wise for Democrats who may be prematurely celebrating the fall of Donald Trump – BE CAREFUL WHAT YOU WISH FOR.